Meh, looks like the Golden Armor bug wasn't fixed at the last update. So I uploaded a V0.6a fix, it's just a single data since I didn't wanted to upload the whole game again just for a single bugfix, just copy it into your Bandits Assault folder and replace it with the old one.
Hopefully this fixes the bug for real this time.

I just released v0.6a it should fix some bugs at chapter 4 and changes some minor things. Just copy your old savegames into the new folder.

-Reduced Gorgu's health a bit
Posted by Draga at 10:41 AM No comments:

V0.6 Public Release and Vote for my next game

V0.6 is now out for public and ready for download! Enjoy playing.

And since there's only a few months left until Bandits Assault is going to be finished it's time to decide on what game I start working next, I had tons of ideas and picked out the 4 best and now it's time for you to decide which you like the most.
More details about the games and everything else you need to know, read here.
Posted by Draga at 9:58 AM No comments:

V0.6 is finally done and I just sent it out to all my 5$+ Patrons. The Public release will be on the 27th August.

Want to play the game one week before everyone else? Or do you like what I do and you want to support me? Or do you just have too much money and you don't know what to do with it?

Then support me and become a Patron!

What's new?
Chapter 4 Additions:
-4 new mainquests (Jay's arena fights completed, adventure guild quest, mercenary quest and the Rookez quest)
-3 new sidequests for people with a bad reputation
-3 new sidequests for people with a good reputation
-3 new sidequest for everyone
-12 New H-scenes
-Some new random events
-I reworked the 'Demon Maze' I reduced some enemies and added new custom encounters to it to make the exploring more pleasurable
I also added a way to skip to the end of the demon maze if you just want to continue with the story.

Others:
-Some monsters are now randomly dropping "Monster Entrails" you can sell them to a guy in ch2 and ch4 for some cash
-Sally's smoke bomb has now a higher chance to blind your enemy
-Added a choice in ch1 at the h-scene with leo (you can now avoid the sex with him)

And here are some teasers! 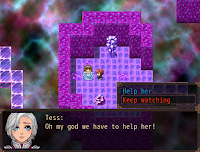 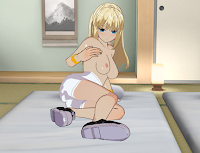 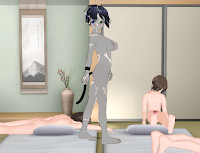 I just wanted to throw out a quick update on how things are going.
The next update will be delayed by some weeks, mainly because I want to add a lot of more things to chapter 4 before I throw out just another small update.

I don't have an estimated time of arrival, yet. But one thing I can say for sure: It will be a big update with tons of new stuff to do, new Quests, new H-Scenes and much more!

Thanks again for all your support and suggestions!
I will keep you updated!
Posted by Draga at 12:27 PM 13 comments: