Hey everyone,
I just wanted to give you guys a quick update on how things are going.

I have some good and some bad news. The bad news are that it will still take some weeks until everything is done but the good news are that it will contain the full game with 3 or more endings with different variants depending on your choices, more H-scenes for chapter 4 and 5, new bad ends, some more polishing and minor stuff for ch2 and ch4 and more.

It will also contain the 'fast forward through text' feature and an 'Easy mode' which basically gives you a level, a stat and a money boost right at the beginning.

The other good news are that I got a proofreader who helps me with all the grammar and spelling errors but unfortunately it's too much text for one person alone and it would probably take forever to look through all the text, but I would really like to get everything fixed for the final version. So I'm looking for 1 or 2 more proofreaders who want to help me with it. The only requirements you need is that you should be very good at english since most of my errors are grammatical.If you are interested just send me a message and let me know. Every proofreader will be rewarded with an early access to the final version of the game and with a complete list to all H-scenes.

Mind over Matter and your protagonist preferences


Hi guys, I thought it would be a good time to give you some more information about the game that comes out after Bandits Assault. Like you probably already know office corruption won at the polls and the official title for my next game is "Mind over Matter".

The goal of the game will be to keep your job with your new found abilities. You start out with the ability to read minds and you will even get new ones like influencing their mind to change their behavior or to control their mind and body directly.

You will get 30 days to get your work done or you will get fired. For everyone that hates timelimits: Don't worry, after you get certain work done (or after you corrupted the right persons) the timelimit will be removed and it will be a lot more open, so the game won't end directly after you managed to keep your job.

I can't really say more right know, since a lot of stuff (gameplay and story wise) is still in progress and not fleshed out yet.


Another thing I wanted to talk about is the protagonist. I got some requests to put a female protagonist inside my next game instead of a man. But like I already stated somewhere I really would like to try something new and fresh and I'm sure a male protagonist will do just that.

However, I got curious and added a poll where you can vote for you favorite protagonist gender.
If I could decide I would probably pick female, but I don't really mind playing as a male too.
But since I don't want to disappoint anyone: I will add an option to the game (if the request is high enough) to choose your gender at the beginning of the game.

I just released v0.7a the reason for it is that I accidentally forgot to remove a pentagram at chapter 1 that wasn't supposed to be there and probably caused a lot of bugs, this update will remove it and also fix some door glitches and other very small bugs.

Version 0.7 of Bandits Assault is now available for public.

Like already announced it contains some new H-scenes, new Bad ends and some expansions. 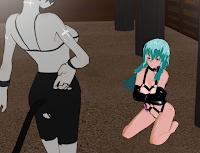 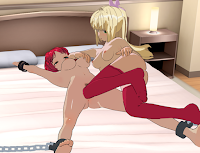